DJ info about me….

I became an avid DJ at about the age of 12 when I got my first set of decks. It was impossible to get mobile gigs at the time as I was to young to pass my driving test. I met up with Graham Brown (known fondly to me as “Gee”) at school. This was partly through his sister Anita AKA (Fan, Cavey, Braaan etc) and partly from doing the Friday lunchtime school discos with Trim Morgan and some other guy (whose name escapes me).

Graham and Anita have fabulous parents and at about the age of 14 we found ourselves getting carted around to do mobile discos in the back of Marion & Stuart’s Volvo estate car. We decided to call the mobile disco ‘The Mark Brown Roadshow’.

After leaving school I had a few jobs including fencing, labourer and then working at Bucks Motor Company (Suzuki Dealership) playing with Suzuki jeeps and cars all day. Graham and I continued with the mobile discos part time, but I was looking to get more into the club scene. After doing a few spots for Enzo (legendary Italian DJ I used to roadie for) I managed to get a regular Friday night slot at a new wine bar in Milton Keynes called Directors.

The venue was owned and run by Steve and Marie Micklewright and I had a great time there when I was working. My residency there lasted about 5 years in all and I have many fond memories (and some not so fond if you know what I mean). All the people were great, bar staff, door staff, other DJ’s as well as the customers.

A fine time was had there and we all had a hand in doing the re-fit in 1996. It was hard work for all but well worth the effort. Sounds great doesn’t it! Plenty of free drinks, lovely ladies, late nights, parties. Well it was all that and more!

Fortunately I have met some really great people over the years through being a DJ at clubs, as well as running the mobile disco with Gee (back in the day!!).

Some of the clubs I have worked in include….

I have also performed at many of other venues, too many to mention. I have supported Dave Pearce, Sash, DJ Yoda, Girls Aloud (lol), K-Klass, Mint Royale, DJ Nilesh (MOS) and Judge Jules (pictured here). Although the DJ era has passed, I do still host a live station called “DeepLounge” – https://deeplounge.co.uk 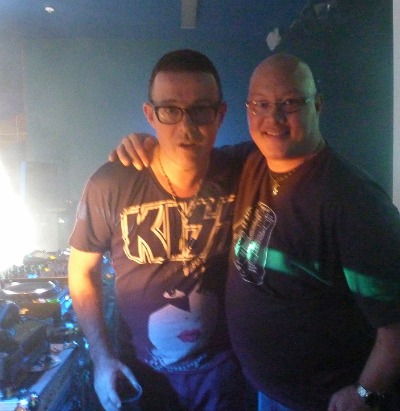